To go along with the ongoing Brookline Street reconstruction and the manhole work at Mass and Pearl, the centralsquare.com blog brings us news of the coming River Street reconfiguration at Central Square. From the City announcement:

The roadway will be repaved and new pavement markings and signage will be installed. The travel lanes on River St approaching Mass Ave will be marked as a thru lane (to Prospect Street) and a right turn lane (to eastbound Mass Ave) to
clarify the operation of the intersection.

Given the pedestrian traffic at Central Square (in the crosswalk and the more freestyle variety), I have a hard time imagining what it takes to "clarify" the operation, but I'm glad they're trying. The best part of the whole project is likely north of the square, where the sidewalk along Prospect will get a needed widening, so people aren't falling out of The Field right onto the street.
All told, construction should last through the fall.
Posted by JB at 8:37 PM No comments:

Recently, MIT shared the plans for the redevelopment of some of the neighborhood's significant buildings. Among these, the Institute has new plans for the historic Model T plant down at 640 Memorial Drive, by the BU Bridge rotary. (Photo at left by Flickr user rnolan1087).

The building harkens back to Cambridge's days as a center for car manufacturing, detailed in Chaim Rosenberg's fascinating Goods for Sale, a 2007 book on the Massachusetts Industrial Age. According to Rosenberg, 640 Memorial was one of thirty plants that Henry Ford built to mass produce his Model T at the dawn of the 20th century. By 1926, the plant was already too small to assemble cars and trucks, so a larger factory was built at Assembly Square (now closed).

MIT acquired the building in 1956. In the years since, it was used first by the Polaroid company, and more recently, bustling with the active and growing biotech industry. Along with a lot of other Research and Development space in the city, it has been difficult to find and keep tenants in the current economy. In response, the MIT Investment Management Co. (the MIT group that manages the Institute's income-producing and tax-paying commercial properties) is now planning a renovation and addition to the property, as seen in the before/after images below.

At a public meeting with the neighborhood, officials from MIT explained that the addition would be built over part of what is parking lot now, and would not affect the curved facade that faces Memorial Drive, or the one-story portion of the building on Brookline Street. It would primarily be visible from the north, along Waverly Drive. MIT has been encouraged at this early stage by the City's consultants to use a modern, glass curtain-wall facade, to distinguish the addition from the historic structure. In any case, it may be awhile before there's any activity on the site, as MIT wants to identify a firm to occupy the full building so that it can tailor the build out for a specific tenant. 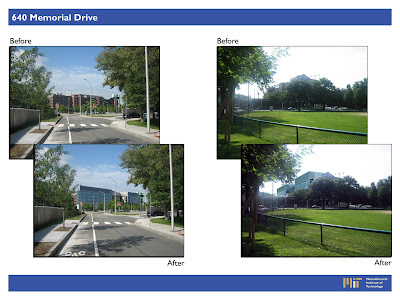 Image courtesy of the MIT Investment Co.
Posted by JB at 10:50 AM No comments:

Taste of Cambridge this Thursday 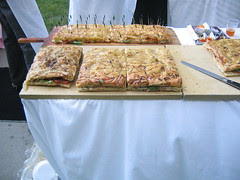 Not technically in Cambridgeport, but the Taste of Cambridge is certainly an event of interest to the neighborhood. God willing, the sun will actually appear in the New England sky this Thursday!

The Taste of Cambridge is a celebration of the diverse restaurant scene in Cambridge. With cuisine from America to Japan to Brazil to France and everything in between, Cambridge is a melting pot — a tasty one to be sure — of culture and cuisine. This event features creative and abundant samples of food, beer and wine from the wonderful restaurants found around the city, enhanced by a beautiful outdoor setting, live music and a great crowd.

The best part of the event, however, is that it is held each year to benefit local Cambridge charities, the folks who work the hardest at keeping this a safe, healthy and family-oriented community! Taste of Cambridge is proud to announce that ALL PROCEEDS from our event will be donated to the following wonderful organizations:

Touted as the "best deal" culinary event in Greater Boston, your small ticket purchase will go a long way towards helping others, and you will be rewarded greatly, with the best food, drink and music our city has to offer! 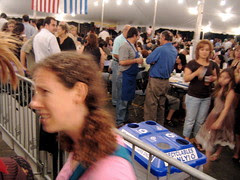 greek festival in cambridge!
Originally uploaded by liuliuliu
Next weekend, June 19-21, one of my personal favorite events of the year returns with the Greek Festival put on by the Saints Constantine & Helen Greek Orthodox Church, located at 14 Magazine Street, just south of Central Square.

This is how it goes down:

First, put an enormous tent over the parking lot. Then, turn Magazine Street into an outdoor picnic. Fire up the bouzouki and some dancing, grab some gyros and a Mythos, and have yourself a great Friday night. And Saturday night. And Sunday night. It's a big, fat Greek wedding, for three straight nights.
Posted by JB at 11:50 PM No comments: 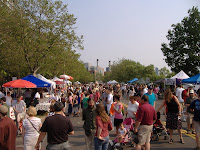 This Saturday marks the return of the annual Cambridge River Festival, a "FREE one-day celebration of the arts along the banks of the Charles River." The mile-long street festival along Memorial Drive features live music, art demonstrations, dance along with dozens of booths with local food and crafts. There are "pre-festival events" beginning at 7:30p on Friday, and the Saturday schedule of events is jam packed with events from noon until 6pm on Saturday.
Posted by JB at 11:21 PM No comments: 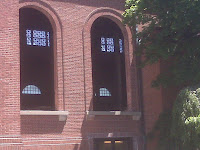 In the last week, neighbors have been hearing sounds that work has resumed on Dana Park Place, a residential condominium conversion of the old Blessed Sacrament church and school. Workers have been seen and heard through the nave window openings, though they've now been covered with plastic to protect from this weeks rain. The project, led by developer Paul Ognibene and contractor Tony Panantonis had been quiet for months since completing the school portion and its 23 units last fall. When completed, the church portion will have 20 additional units nestled behind the architecturally handsome masonry building designed by local architect Charles Greco in 1907. The Archdiocese of Boston sold the buildings to Ognibene in 2005.