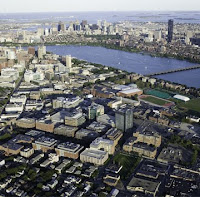 This year's Town-Gown presentations regarding Cambridge College, Harvard, MIT and Lesley University will be this Tuesday. We took a closer look at C-port neighbor MIT's report in this post, and the full report can be viewed there (or, as always, in the Neighborhood Resources link at the top right of the blog). The other reports can be viewed in the announcement below.

The details, per the city announcement:

The City of Cambridge Annual Town Gown Presentation to the Cambridge Planning Board will be held at the Cambridge Citywide Senior Center, 806 Massachusetts Avenue on Tuesday, February 2, 2010 at 7:30pm. The meeting will also include an opportunity for public comment. The 2009 Town Gown Reports can be viewed on the Community Development Website. These reports describe current activities of the institutions, including data about student population, institutional housing and future development plans.

For more information about the Town Gown reports and presentations, please contact Clifford Cook at 617-349-4656 or ccook@cambridgema.gov. 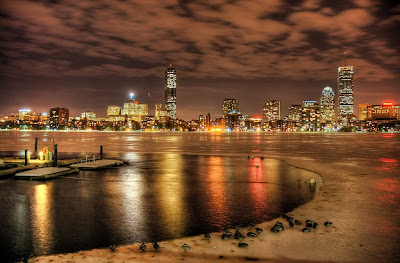 After a week's respite from below-freezing temps, this morning the winter freeze returned in force. Some solace can be found in some of the beautiful sites around the neighborhood when winter strikes. Today's entry in the C-port Scene series comes from Flickr user Craig Stevens (used under Creative Commons), and captures the view from Memorial Drive across the river during a similar stretch of cold last winter. Bundle up for the below-zero wind chill out there.
Contribute your photos to the series! Upload them to Flickr and tag them "Cambridgeport," and be sure you've granted permission under Creative Commons.
Posted by JB at 8:47 AM 1 comment: 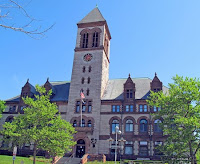 So the first time, it was an interesting insight into our fair city's quirky mayoral election process. A week later, we had to stifle a laugh. But seriously? We're going into February without a Mayor?

Per the Chronicle, "councilors stuck to the same votes they cast the last time around. Councilor David Maher lead the pack with four votes, followed by Ken Reeves with three votes and two for Henrietta Davis. A city councilor requires at least five votes from fellow councilors to become the mayor."

This may indicate one of two things:

Maybe if Marjorie Decker moves on to Gallucio's Senate seat they can break the stalemate?

Photo by Colleen Bryant, courtesy of City of Cambridge website

From the folks at Cambridge-Somerville for Change:

Cambridge-Somerville for Change’s Energy and Climate Team and Green Decade Cambridge will host "Copenhagen and Beyond," a forum on Jan 26th, 7:00pm at Cambridge Central Square Library, 45 Pearl Street to discuss the recent U.N. Climate Conference in Copenhagen. Key speaker Cambridge City Councillor Henrietta Davis, one of the National League of Cities’ two official representatives, will highlight her experiences at the conference and discuss what our cities can be doing to stop the coming climate emergency. Kate Anderson, Senior Policy Advisor to Senator Kerry, will also discuss the Senator’s proposals on energy and climate change.

RSVP by following this link.
Posted by JB at 9:01 AM No comments:

Be Careful Out There

Following the recent lewd acts and assaults around the Central Square T, the Chronicle brings news of another alarming attack last Wednesday near Pleasant and Western in Riverside.

At 12:19 a.m., officers responded to a report of an armed robbery on Western Avenue by Pleasant Street. They found a 39-year-old Cambridge victim with a head wound and blood covering the right side of his face and head and soaking through his clothes and sneakers.

The victim told police he was walking on Western Avenue from Central Square when a car pulled over in front of him as if to park. Three men got out on the sidewalk in front of him.

Some simple math: depending how you see it, today's Special Election comes down to one of two equations: 60>59, or 41>40. Both have a big impact. So don't forget to vote. See the Election Commission's website for voter info.
He is watching.
Posted by JB at 10:35 AM No comments:

This does not bode well for the Republic.

City Council, after failing to elect a Mayor from among their ranks last week, resumed the deliberation at last night's meeting where they, um... failed again. This is all pretty hilarious to many of us, but honestly, what if there's an emergency intersection honorary square-naming in the next week?

Kidding aside, David Maher will likely seal the deal at the January 25th meeting.
Posted by JB at 1:26 PM 1 comment:

Bill August passes along notice of next month's CNA annual meeting and Board of Directors election:

Happy New Year and happy New Decade! The Cambridgeport Neighborhood Association annual meeting and election for four expiring Board of Directors seats will be Feb. 24, 7 pm at usual meeting place at community room of Woodrow Wilson Court, on Fairmont St., off of Magazine St.

Please feel free to run for Board of Directors position, or to nominate someone who is interested. Anyone interested in being on the Board must be nominated and seconded by Feb. 10 (14 days prior to Feb. 24). Nominations and seconds of nominations can be sent to billaugustUSA@aol.com

The agenda on Feb 24 will also include presentations on aging in Cambridge and senior citizen issues by Elaine Thorne of Cambridge Community Development Dept.; and we have invited speakers regarding City planning pertaining to Charles River preservation and enhancements. Cambridge Community TV has also expressed interested in sending a representative to discuss CCTV's community and neighborhood media services. 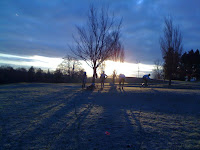 A bill authored by State Rep Marty Walz (along with Rep. Byron Rushing and State Senator Anthony Petruccelli) slowly moves toward passage in the State House. It is known formally as H. 853: A Bill to Protect Certain Parks, but sometimes just called the "Anti-Shadow" bill.

The draft legislation proposes that "no permit granting authority shall take any action which would authorize the construction of any structure which would cast a new shadow on the Charles River Esplanade, Christopher Columbus Park, Commonwealth Avenue Mall, Copley Square Park, Magazine Beach Park, or Rose Fitzgerald Kennedy Greenway," though some of the specific locations are still evolving. Proposed nearly a year ago, a recent public hearing has stirred the news.

Though Walz is a primary proponent and C-port contains significant frontage on Magazine Beach, the legislation's impact on our neighborhood would be minor compared to other parks. Most of Mag Beach lies to the south of C-port's buildings (and future buildings), so shadows are primarily cast away from the park. Memorial Drive further buffers the park. The CNA Board of Directors has drafted a letter of support for the bill, saying in part:

Cambridgeport residents have been very upset by the construction of tall towers adjacent to green, open parklands, which interferes with the enjoyable use of scarce open space for the benefit of a handful of property owners willing to sacrifice the beneficial and historic use of parks for their own adjacent development plans.

The bill would have significantly greater effect on potential development near some of the other proposed parks. It's hard to imagine development of any kind occurring in the financial district that doesn't cast a shadow on some urban parks, which is why the Rose Kennedy Greenway was recently exempted from the proposed legislation. Some in the Boston development and design community have expressed serious concerns about the bill's effect as a de facto building moratorium. Preservation advocates in Back Bay and the North End have expressed support. Walz herself wrote in the Boston Courant to describe her and Rushing's motivation for the bill.

A public hearing on the bill was held on December 15th, but those wishing to comment can still send emails to the Massachusetts Joint Committee on the Environment, Natural Resources and Agriculture Committee Co-Chairs Anthony.Petruccelli@state.ma.us and Rep.WilliamStraus@Hou.State.MA.US (cc: Rep.MartyWalz@Hou.State.MA.US and Rep.ByronRushing@hou.state.ma.us). 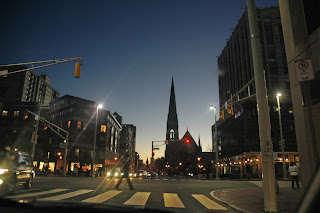 The City asked, and people responded: What does Central Square need to fulfill its potential as the lively, transit-oriented center of a diverse community?

Results came in two forms. One was through the "Envisioning Central Square" forum hosted by Councilors Denise Simmons and Sam Seidel in December. The comments, as reported in the Chronicle, were predictable, "the most prominent of which showed that many Central Square patrons want more shopping options, more upkeep and cleanliness and less public drinking, loitering and homeless people on the streets." In fact, homelessness dominated the conversation as any Central Square conversation must. The Chronicle's writeup includes some interesting contributions from Len Thomas of the Cambridge Multi-Service Center and Superintendent Steven Williams on CPD's Homeless Outreach Program.

The other results came (in more detail, but less frankness) in the CDD-produced summary report for the Central Square Intercept Survey, which nonetheless contains some interesting data about the public's desired retail options (hint: people want The Gap back...)
ed_survey_central
Thanks to neighbor Carolyn Shipley for the links!

The city's quirky mayoral selection process failed to resolve itself in today's City Council meeting, and so we must wait until next week's meeting to identify the new Mayor. From the Chronicle's update:

It was up to the nine newly sworn-in city councilors to elect the mayor, but their votes were too split to reach a decision. David Maher lead with three votes; Marjorie Decker and Kenneth Reeves received two votes each; and Henrietta Davis got one vote (her own.) Former Mayor Denise Simmons’ own vote was also the only one Simmons received.

A little late on this, but many in C-port will be interested in the planned reconstruction of Western Ave in neighboring Riverside beginning summer 2011. Having experienced the Brookline reconstruction over the past year, I can vouch that it's no fun during (especially at 7am), but completely worthwhile in the end. The city is seeking community involvement in the planning of the new streetscape.

Per the Community Development Department announcement:

Western Avenue is scheduled to be fully reconstructed. The underground stormwater system, utilities, the roadway and the sidewalks will all need to be replaced. The redesign will consider all users of the street: walkers, bicyclists, bus riders and drivers. The redesign process is about to begin and will consider traffic patterns, lighting, trees, green space and environmentally friendly features.

For those interested in getting informed or involved, take the city's survey, send a letter of interest this week to join the project's Citizen Advisory Committee, or contact jrosenblum@cambridgema.gov in the CDD.
Posted by JB at 6:36 PM No comments: