Planning recommendations for the 2009 update of the Cambridgeport Neighborhood Study have been available for the past few weeks at www.cambridgema.gov/cambridgeport (this link to the Community Development Department's C-port page is always available under "Neighborhood 5 Planning Links" in the sidebar at right). Today and Friday are the last days to submit comments on the '09 update.

Some of the recommendations that caught my eye:
Contact Neighborhood Planner Taha Jennings at 617-349-4603 or via email at tjennings@cambridgema.gov if you would like a hard copy of the planning recommendations sent via mail or if you have any additional questions.
Posted by JB at 9:02 AM No comments:

UPDATE: I've added the public meeting notice filed by the city at the bottom of the post. Note the waivers for parking and yard requirements asked for by the applicant.

Last week, the Homeowner's Rehab (HRI) and ICON Architecture team held a public meeting to update the progress on the proposed housing development at 625 Putnam (discussed in detail in this post). I wasn't able to attend the meeting, but Jane Jones, a Senior Project Manager at HRI, passed along the following notes:

HRI will present the updated plans in a public meeting with the City Planning Board on August 18th as the next step in the process.

If others were at the meeting, please share additional info/observations in the comments...

The Public Meeting notice for the 8/18 meeting:

The Planning Board of the City of Cambridge will hold a public hearing on Tuesday, August 18, 2009 at 7:30 p.m. in the Second Floor Meeting Room at City Hall Annex, 344 Broadway, Cambridge, Massachusetts on a Special Permit application (PB#240) by Homeowners Rehab, Inc., for a 40 unit residential development at 625 Putnam Avenue. The proposal is to construct 27,970 square feet of residential use and 28 parking spaces. The application is for a Multifamily Development (Sections 4.26 and 10.47) with a request to waive the side yard requirements as allowed under Section 5.24.4(3) and waive the parking requirement as allowed under Section 6.35.1(6) and 10.45.

The applicant also requests a waiver of the Special Permit Application fee. Copies of this petition are on file in the Office of the City Clerk, City Hall, Cambridge, Massachusetts and at the Community Development Department, 344 Broadway. Questions concerning the petition may be addressed to Liza Paden at 617 349 4647 or lpaden@cambridgema.gov. 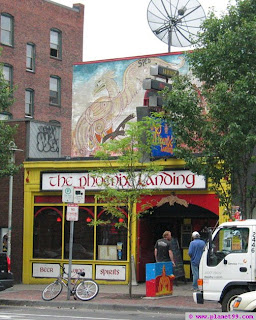 Via centralsquare.com: Phoenix Landing, the live music club at 521 Mass Ave, seeks to add outdoor seating for its patrons. The club lies squarely in a lively stretch of Mass Ave that has some issues with litter and loitering, but has some of Central Square's best establishments. Will the outdoor seating cause more trash, or add a little order to the area?

Phoenix Landing has applied for a license to add 19 Tables and 38 seats. They would be on an outdoor sidewalk patio. A public hearing will held Monday evening August 10, 2009 at five o’clock at 831 Massachusetts Ave. 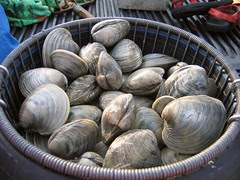 This Saturday, the Central Square Whole Foods (115 Prospect St) is having a clambake to benefit the MIT Sea Grant College Program's efforts in promoting sustainable seafood. All the summertime fixins, minus the sand, for $5.

Whole Foods Market is the only supermarket with its own waterfront seafood processing facility, Pigeon Cove, which enables it to provide its shoppers with the freshest local seafood available. MIT’s Sea Grant College Program will also be at the event highlighting some of its new programs such as the Sea Perch for Around the Americas, its involvement with a community supported fisheries project in Gloucester and its underwater research initiatives.

The folks from Pigeon Cove will be on hand, showing the finer points of oyster shucking. Finally, the summer is really here!

The State of the World

This would be absolutely hilarious, if it weren't so sad. From the Chronicle:

From time to time, this space will feature an image from the neighborhood that shows Cambridgeport at its most historic, urban, colorful, and diverse (the reasons, at least for me, the neighborhood is home.)

Today's entry is this photo, by Jessica Sedgwik, capturing the intimate and casual interior of Baraka Cafe on Pearl Street. Come for the cozy otherworldliness... stay for the cherbat. 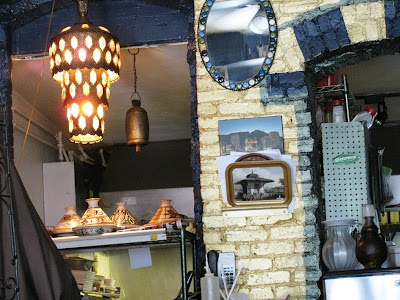 Contribute your images! Upload them to Flickr, and tag them cambridgeport.
Posted by JB at 2:35 PM 1 comment:

A tale from the Chronicle on a not-so-amusing new Independence Day "tradition" at one address on Putnam Avenue. A selection:

Browne’s house was also the site of a tense confrontation between police and partygoers during last year’s July 4th celebration after officers arrested two men for attacking a third man outside the house party, according to police reports. At that party, police reported a crowd of about 250 people standing in the street and sidewalk in front of the house and blocking traffic, and a large number of officers had to be called in to break up the crowd, according to reports.

Browne apparently decided to throw another house party this year. 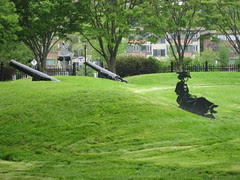 Today this blog ventures for the first time into the Holy Trinity of neighborhood blog flame wars: kids, dogs and parking. No issues seem to inspire the same ruthless, neighbor-versus-neighbor carnage as these. For those in C-port, the Fort Washington/ Dog Park issue is nothing new, especially to those familiar with the Friends of Fort Washington or with city dog park politics.

New events, however, have brought it back to the forefront. First, the temporary chain-link fencing around Fort Washington has finally come down, and indications are that the park will reopen in August (though that date has already been delayed several times). Now, the Pacific Street Park's dedicated dog run is under reconstruction. While grateful for the temporary adjacent site, dog owners are reminded of how precarious is the status of the one dedicated dog run in our portion of the dense city. A new bulletin posted there urges fellow dog owners to delve into the reopening of Fort Washington by contacting the City's Area 5 Neighborhood Planner, Taha Jennings.

Between these recent events, old wounds resurfaced, originally inflicted on, among others, Cambridgedog.com and Revolutionary history blog Boston 1775. The latter includes this thoughtful post, followed by an amazing back-and-forth in the comments that demonstrates how vitriolic the dog park issue gets, even among non-dog-owner history buff types. The author of the post covers most of the issues in detail, so I won't rehash them here. It's well worth a read.

[Full disclosure: I do "have a dog in this fight" -- I live just a few blocks from the park, I have a dog that I walk throughout the neighborhood frequently. It should be unnecessary, but I'll add that yes, we clean up after our dog, keep him on leash/under control/not barking. I also happen to be a big city park fan and love our little 'hood's historical narrative, and I know how torn up the heavily utilized Pacific Street park gets, so I clearly see both sides here.]

Folks like me who arrived in the neighborhood in the past few years might need a brief primer on the Fort's history, especially since it has mostly been closed for the past year. The park's current state is a little misleading. It is without a doubt a fascinating historic site, but one bearing little resemblance to the original half-moon shaped, Revolutionary-era battery. The cannons and fence are all part of a Victorian-era reconstruction when the state acquired the site in the mid-19th century. The 2D sculptural art is a 1987 installation.

Here's a short background on the park itself, via waymarking.com.

﻿The half-moon fortifications at Fort Washington Park date back to 1775. Fearing an attack from the Charles River, General George Washington ordered a series of these fortifications built along the banks of the river. Once the war ended, all the other fortifications were destroyed in the course of development, but Fort Washington stood until 1857, when it was bought by the state and restored. At this time, 3 cannons from Fort Warren in Boston Harbor were brought to the site, and a grand granite-and-iron fence was installed, designed by John R. Hall. No battles were fought at this site, and no soldiers died.

Withholding most of my own opinions here, I think it's pretty obvious that Fort Washington is pretty underutilized as a public park and as an important pedestrian connection (via Annis Crossing). I don't envy the City Planning folks who need to sort out the best use for the park, but here's hoping it's resolved soon.

UPDATE: Apparently, someone calling themselves "Cambridgeport Neighborhood" forcibly reopened the park with bolt cutters over Independence Day. This blog's name and the perp's are coincidental, which is unfortunate. More gasoline on the fire. 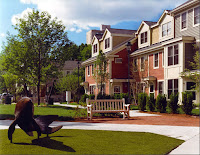 Just received a notice from Homeowners Rehab (HRI) about the new housing development proposed for the southern corner of Putnam and Sidney, known as the "625 Putnam" project. HRI has acquired two vacant, semi-adjacent parcels in southeast Cambridgeport (see project location map, below). For the project, HRI is teaming with ICON Architecture -- the same team that developed Auburn Court on Brookline Street, pictured at left (image courtesy ICON).
HRI seeks to develop rental housing financed through Low Income Housing Tax Credits (LIHTC), and other subsidies, allowing them to offer the units to households with low and moderate incomes. In affordable housing-ese, they'll likely have units with renters below 50 or 60 percent of AMI, with a handful below 30 percent. In plain English, this means a typical renter will be a 4-person household earning less than $50,000 a year, or a two-person household earning less than $40,000 per year.
The meeting details, and some project background from the first public meeting:
Date: Tuesday July 21st, 2009
Time: 6:30 p.m.
Location: Morse School Auditorium 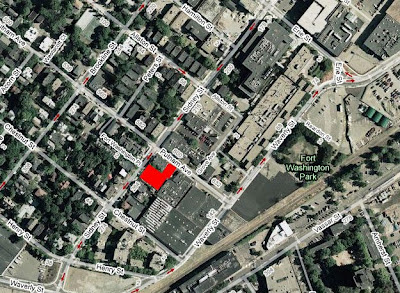 The project is being planned as two different buildings. One will front onto Sidney, conceived as "contextual" in massing and design (read: lower height, clapboard). A quick glance at the Cambridge Zoning Map shows that this building falls in a residential "C-1" district, meaning (among other things) it is permitted to be multifamily housing up to 35' in height. The other will front onto a relatively industrial block of Putnam. ICON, in the first public meeting, discussed their thoughts about making this building slightly larger and more contemporary, owing to the transitional context of that block, from residential to industrial/MIT. Of note, this project lines one of the primary points of access to the planned Cambridgeport stop of the Urban Ring.
Posted by JB at 12:56 PM No comments: