Let's Go to the Beach! 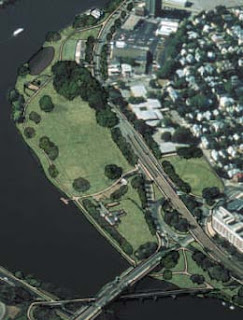 With what's looking like a great weekend of weather coming up, it will be a great opportunity to head down the the Charles and see the newly reopened Magazine Beach park. The reconstruction by DCR is part of a massive, ongoing transformation of the Mag Beach area that has been underway for years (with some aspects coming under a good deal of local criticism).

At Wednesday's CNA meeting, Cathie Zusy passed along some of the park's key summer dates:

Also at the CNA meeting, some folks from CDD presented a draft report as an update on the City's effort to improve our relationship with the river and the reservation parkland. Have a look at the report here.

Image from the 2002 DCR Charles River Masterplan of an initial idea of the reconstruction.

Local businesses and active Cantabridgeons take to the streets this Saturday in the Second Annual Central Square Cleanup. Looks like the weather will cooperate nicely, too.
Start 8:30 am at Clear Conscience Café (581 Mass Ave) for tea and coffee. Finish up at 11:30 am at Toscanini (899 Main Street) with ice cream and big thanks!!
h/t to Minka vanBeuzekom; Photo by Flickr user meeralee, used under Creative Commons.
Posted by JB at 5:30 PM 4 comments:

A Big Week for C-Port Meetings

UPDATE: 24 Decatur Street has been removed from Thursday's BZA agenda (and moved to June's meeting) at the owners' request.

Here is their reasoning:

Because we have made some last-minute changes to rearrange parking and further reduce the footprint and volume of the proposed building in the back of the lot, we will be asking the Board of Zoning Appeals for a Continuance of our case. This means that it will be a waste of time if you were planning on attending the meeting to support or oppose our plans (or simply hear more about them). We regret any inconvenience this change may cause. When the Board instructs us about the new date we will spread the word.

Lots of actvity in the neighborhood lately, and there are several meetings this week to gather info and give feedback:

Monday (4/26): Western Ave Community Walk
6pm, beginning at Andala Cafe at 286 Franklin St.
The third of the ongoing series of community walking tours to inform the planned Western Avenue reconstruction, this walk will focus on traffic, signals and stop signs. Over 20 people turned out for last Monday's walk. Per the City: "These informal walks are led by city staff with occasional outside guests. The walks provide opportunities for neighbors to learn more about the project, and provide input to city staff. The walks are free and open to the public. Each walk will start near Central Square, go down Western Avenue to the Charles River, and back. All walks are on RAIN or SHINE."

Tuesday (4/27): Neighborhood Meeting for LBJ Apartments revitalization
7pm, Morse School auditorium at 40 Granite St.
The second of two public meetings to discuss the CHA's planned revitalization of the 178-unit LBJ Apartment complex on Erie Street. Spurred by a $10 million Federal stimulus grant,
the CHA and Tise Design Associates have been working to develop plans to renovate the building exterior, core buildings systems such as heating and ventilation, as well as significant improvements to unit interiors and common spaces. The meeting will provide an overview of the first meeting and also present new plans for the landscape design and site work.

Thursday (4/29): BZA Hearing on 24 Decatur Street proposal
8pm, Cambridge Senior Center, 806 Mass Ave.
Come hear about a relatively small project that has garnered a large amount of neighborhood attention lately. Come especially if you have useful input for the BZA to make an informed decision on the proposed variances.
Posted by JB at 10:04 PM 1 comment:

It's the Little Things 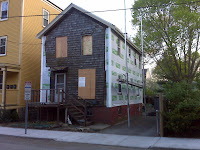 Every generation or so, a really huge, transformational change comes to a neighborhood like Cambridgeport, sparking endless discussion, heated argument, and immediate and obvious impact. The redevelopment of the University Park is an example of one such change, masterplanned and debated to the Nth degree. But really it's the little decisions made by each of us, repeated hundreds of times across the years, that shape C-port's physical and social makeup. I've often wondered while walking through the neighborhood if we really grasp how our decisions on our own property affect others, just by adding or altering our daily routines, from using a garish new color of housepaint, to planting a beautiful flowering pear tree, to keeping junk in our front yard. These decisions--and how we react to them as a community--are a big part of what makes up our daily lives.

I've been fascinated to watch this interaction play out in recent weeks in sidewalk conversations and over the CNA listserv as neighbors discuss one single decision by C-port homeowners to build an accessory unit that requires special permission from the city (variances from city zoning laws, but fairly common ones). Some reacted to the physical constraints the new structure would impose on the block and on abutters, reducing light, open space, privacy, and parking in a block with little of each. In contrast, others saw a family following the right process with the city and their abutters, on their own property, to pursue a decision with plenty of local precedent. Some of these observers wondered how they would feel about others opposing a similar decision of their own.
First, from the owners themselves:

We know that there has been considerable development in the area in the recent past, and not all of it has had a positive impact on the neighborhood.We think our project will have a positive impact, for we are renovating (and slightly reducing the size of) an existing structure that's in very bad shape and building a new home in the back of a lot that's also in rough shape. Where no one could live before, two families will be able to reside—in buildings very much in keeping with the character of the neighborhood.

...and selections from the ongoing dialogue:

"several of us in the neighborhood oppose this new construction as it would destroy the privacy and open space currently in place between 15, 21, 23 valentine st, 20, 22 decatur st, and other abutting properties. adding another single family house on the small lot would ruin green space, crowd the neighborhood, and increase the number of cars parked on decatur st. we feel that renovations and an addition to the existing structure would suffice, and see no reason to grant the variances."

"The privacy and open space enjoyed by the properties adjoining no 24, in Decatur St, Valentine Place and Valentine St, will be lost forever; increasing the density of housing by allowing a second house to be built on a very small lot will alter the character of the neighbourhood for the worse and devalue the existing properties."

"It makes sense for all to work in a cooperative manner if possible - for those who are building to have some consideration for the neighbors and for the neighbors not to raise objections based on their preference of having space they don't own stay vacant."

To me, this is exactly how these things should be done. Reasoned commentary from neighbors leading to a public meeting next week where City planning and zoning officials can make an informed decision based on letters and comments from the public.

Have an opinion? Join the meeting: the Board of Zoning Appeals will be holding a hearing on the variance application on Thursday April 29 at 8:00 PM at the Cambridge Senior Center, 806 Massachusetts Avenue.

Next CNA Meeting on Wednesday the 28th

There will be two presentations on proposals for future use of the land bordering the Charles River, principally on the Cambridge side. Representatives from Livable Streets Alliance and the City of Cambridge will present their riverside concepts.

LBJ Apartments to be Renovated this Summer

The Cambridge Housing Authority held a meeting last night to review plans to renovate LBJ Apartments on Erie Street. Construction is anticipated to begin in August of this year. Having been out of town, we missed the meeting, but here's some information from the flier sent to abutters:

The Cambridge Housing Authority, residents of L. B. Johnson Apartments and Tise Design Associates have been working to develop plans for a renovated LBJ including the building exterior, core buildings systems such as heating and ventilation, as well as significant improvements to unit interiors and common spaces. A main focus has been to improve the energy efficiency of the building.

The Cambridge Housing Authority received a $10 million Federal Stimulus Grant that completed the funding necessary to proceed with modernization at L. B. Johnson Apartments.

For more information, call (617-520-6259) or email Allison Lynch in the Planning and Development for the Cambridge Housing Authority.
Posted by JB at 11:27 PM 1 comment: 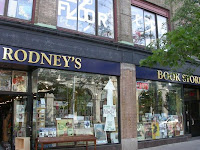 More Central Square retail news, via CentralSquare.com. From the post:

Ken Reeves announced Monday at the city council meeting that Rodney’s used bookstore is closing as the owner wants to retire. He said there was some good news that the space may become a nightclub. Rodney’s book store is located at 689 Massachusetts Ave in Central Square.

Spurred on by lots of recent and impending changes to Central Square--including store closings and news of restaurant openings--the City is tackling the oft-maligned Square's public image head on. The first step is to move through a process that encourages a broad public dialogue in the Square's problems, its strengths and its potential. That dialogue will next take the form of specific, topical conversations held over the next few weeks. Join any or all of the groups below (listed in order of meeting date):

Street and Sidewalk Appearance and Cleanliness
This group will tackle another of Central Square's most stubborn problems related to its often dingy appearance. Some initial topics include more bike racks and moped parking, improved facades and window art, incorporating the backstreets of the Square into the retail environment, examining recycling and public toilet options, pedestrian safety, lighting, and benches, and improving snow removal.
April 15th, 6:00 p.m. to 7:30 p.m., 344 Broadway, 4th Floor Conf. Room

For more info on the broader effort by the City, contact Estella Johnson, the Director of Economic Development, at estellaj@cambridgema.gov or at 617-349-4616.
Posted by JB at 7:18 PM No comments: